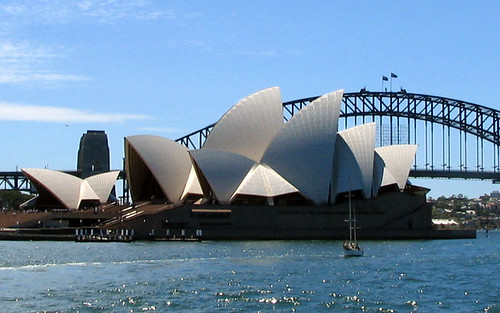 Sydney, in many ways exudes the vibe that sort of says: “I’m the best city in Australia.” With its almost-perfect weather, sexy beaches, magnificent harbor, and the Opera House that seems to top it all off like a fluffy cloud of whipped cream atop an ice cream sundae — who wouldn’t want to pencil it in their itinerary?

It has been said that Sydney is just a pretty face compared to its eclectic sisters, Melbourne, and Brisbane, but it turns out that this lavish city’s access to water gives it a charm all its own. In a recent article in the Daily Telegraph, Cameron Wilson explores Sydney through the eyes of its spectacular harbor. His local journey begins with a trip to Campbell’s Cove where he boards the Southern Swan, a tall, Danish built vessel, for a two-hour cruise (with drinks and barbecue) around the harbor. Wilson expresses his enjoyment of sailing on the smooth waters abutting the Quay and the many interesting experiences one can have:

There are myriad options for getting out on the water in Sydney, from tours that focus on colonial history to genteel dining cruises and hair-raising jet boats, but for simple elegance, a traditional three-masted tall ship is hard to beat. The moment the skipper cuts the engines and the crew hoists sail, the only noises we hear are creaking timbers and the gentle slosh of waves against the bow.

Gliding on the SuperCat (a ferry that navigates the harbor) offers spectacular views of the Opera House, Botanic Gardens, “coves bulging with yachts, tiny secret beaches, odd little lighthouses and beacons and the world’s most expensive waterfront homes.”  (This is the part where you close your eyes and pretend you’re there, wind in your hair, on a warm, sunny day enjoying the vistas, and feeling the “tingly warm” sensation one feels when falling into a blissful state of contentment.)

And there is food. Good food (according to Wilson). Not on the harbor, as those by the water are pocket-burning expensive, but travel 20-minutes by bus from the Quay, and you will find King Street, Newtown. A lively area packed with great music venues, and small eateries; this is where travelers can get a sense of the funkier, more lax side of Sydney. And while heading back,  if you’re craving one last glamorous rendezvous,  you can be pretty sure that the sassy side of the city will be waiting, glistening in its perfect way for you to take one last ride around the harbor.